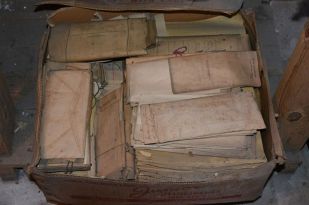 This is one of a countless number of 19th century records seized by the North Carolina Archives and burned on December 6, 2013

I rarely re-blog, but this one deserves being spread far and wide.

Please read the whole post included above – but the gist is as follows:

– This summer a new Clerk of Court in Franklin County discovered a trove (an entire roomful) of documents, some dating back to 1840, in a previously sealed room in the Franklin County, North Carolina Court House.

– The Local historical group enthusiastically poured themselves into the project, mobilizing volunteers and the whole community – securing space to work, materials, and finances – in order to catalog and preserve the bounty of record books, photographs, deeds, chattel records, land grants, deeds, wills, personal correspondence, and countless other materials from a wide variety of government departments throughout the county. (This room had apparently become the “graveyard” for old records, and no one bothered to investigate it for many, many decades.)

– In August of this year, the Local Historians – realizing they may be beyond their depth in regard to the value of some of these materials, contacted the North Carolina Department of Archives, seeking guidance on proper preservation techniques and value assessment.

And that’s when things went hinky. The NC Archives group stepped in, pulled rank, and immediately halted all work on the project, stating that they were going to study the challenge and come up with “Next Steps”. Months passed and nothing got done, while the documents languished in the basement of the courthouse.

Then, on Friday, December 6, 2013, at 6:00 in the evening (after all the county workers had left, and with no notice to the local historical group involved in the project), a team from the North Carolina Archives swept in and confiscated ALL the materials – with the cover of Law Enforcement! They took the documents to the County Incinerator, and methodically burned EVERYTHING. They did this while a few locals stood by, not understanding why or precisely what was happening.

[CORRECTION: Added 01/06/2014 – The folks who swept in to claim and destroy the documents were NOT from the NC Archives. A team from the NC Archives did seize many boxes of documents from a workroom managed by the Franklin County Historical Society – but they were NOT directly involved in the destruction of the materials in the basement.

ADDENDUM TO THE CORRECTION: Added 01/06/2014 – A number of people have posted/emailed asking if I know what County Agency was responsible. I do not know for certain. So far conjecture leads me to the Franklin County Manager’s office – but until I hear her side of the story – my opinion is uninformed except by silence. Sorry.]

Every book, deed, will – every photograph – every piece of paper in that room was incinerated that night. No explanation has been given, and no media attention has asked any questions.

Boxes of documents from the Franklin County Courthouse seized and burned by the North Carolina State Archives.

HERE’S WHAT I THINK:
After the Civil War (after emancipation), a lot of large land-owners deeded out substantial tracts of land to their former slaves. These former slaves had demonstrated to their masters that they were loyal, hard-working, and would continue to farm and contribute to the plantation collective as they always had. The only difference is that they would own the land they worked, and earn a somewhat larger income as a result of their efforts.

During reconstruction, a lot of land holders, both black and white, had difficulty paying very high property taxes imposed by Federal Occupiers. In swept speculators and investors from up North (these people have come to be known as “Carpet Baggers”.) They often forced white land owners to sell out at a fraction of the actual value of their property. In the case of black land-owners, sometimes all the Carpet Baggers offered was threats. The effect was the same – a vast transfer of wealth from titled property owners to new people who became, in the decades of the late 19th and early 20th century, among the wealthiest people in the South.

How do I know this? Some of my own ancestors were Carpet Baggers from Maryland. They made a small fortune after the war, stealing land, setting up mills, and effectively re-enslaving two or three generations of both poor-white and black natives of Halifax County, North Carolina.

My suspicion is that in and amongst all those now destroyed records, was a paper trail associated with one or more now-prominent, politically connected NC families that found its wealth and success through theft, intimidation, and outrageous corruption.

Prove me wrong. You can’t. They destroyed the records.

Shelves of record books from the Franklin County Courthouse seized and burned in December, 2013.

Musings on the history of Fredericksburg, public history, the Civil War, and the Army of the Potomac--whatever I'm working on.

For lovers of reading, writing, books