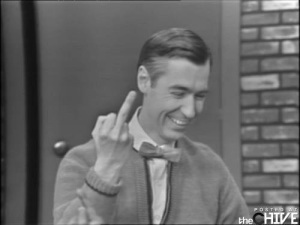 I just completed reading Rick Bragg’s All Over but the Shoutin’, which was recommended to me by Charles McNair. In truth, I just completed the second reading. As soon as I finished it the first time around, I started over again, ‘cause I had to make sure I’d read it right. First time I’ve ever done that with any book – ever.

Since I now know I read it right the first two times, I went to ABE and ordered his entire backlist. I’ve never done that before, either. I’m not loyal to authors (generally speaking.) Okay… maybe a couple; Jane Austin (when I am melancholy and hopeless), Bruce Chatwin (when I need to get out of my own head), and James Lee Burke (when I really feel like slumming.) Think what you will, if you could see what all I’ve read over the last three or four years, you’d know this loyalty is atypical.

This book – this man’s voice – got into my head and got under my skin. Too many similarities in our early lives to ignore; too many stark contrasts to gloss over. I’m still processing it. But I’ll say this; Rick Bragg has given me hope that an insecure, beat-down, quietly pissed off person with a hard, chiseled chip on her shoulder might still have a chance in this Starbucks, homogenized world. Prior to reading this memoir, I never really thought it was possible. I just accepted that I was doomed to dream and wish without any hope of actually accomplishing anything worthwhile. (If you ever heard anything contradicting this notion, it was pure bravado. I never believed it. Not till now.)

Just to be clear, I am not aspiring for a Pulitzer. I know better than that. Hell, I’d be satisfied just to get a publisher willing to put my verbiage between two covers and then have some bookseller scan a bar code on it. The idea that someone might want to read something I wrote is as big as I dare dream. It’s big enough for me. This time around anyway. (I’m a believer in multiple opportunities at screwing things up.)

Rick Bragg has given me permission to have any dreams at all. If that Alabama cracker can do it all the way to New York and the Pulitzer, then by God I can do something closer to home. And suddenly I don’t give a rats ass what my family thinks (I didn’t get the support Rick got, still don’t, never will), or what the world thinks, or how poor I am, or how old I am. I’m just about fed up with people telling me to stop wasting my time and get a job (I tried that for 30 years, it sucked, it didn’t work, and it made me miserable.) I’m tired of wasted time and wasted energy on other people’s bullshit.

I’m going to take a line out of Rick Bragg’s book and just refuse to listen to or be intimidated by the people who have been working in concert most of my life to keep me in check. Fuck ‘em all. I’m gonna do something with this drive. And then I’m gonna keep doing it until I die of trying to do it the rest of my mortal life on this earth.

Rick Bragg has finally given me permission to write from who I am, and what is real as I experience it, and stop trying to be something I am not.

All Over But the Shoutin’, by Rick Bragg – Review 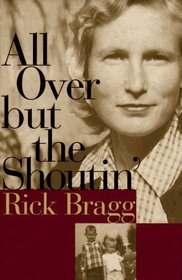 All Over But The Shoutin’, a memoir of life in the American South that few writers as gifted as Bragg have ever even visited, much less survived.

All Over But the Shoutin’, by Rick Bragg

For his memoir, Rick Bragg reveals the raw bone of dirt poverty in which he grew up. The culture of violence, abuse in every medium, and the grinding pain and humiliation of inequity – as a blow-by-blow assault the poor-white-classes in the South endure every day. Bragg’s South is not the South I grew up in; but I could sure see it from my grandmother’s back porch steps.

This book is so well written, the time, place and people so familiar, I simply couldn’t put it down. It made me ask – how do people manage to survive this life? But moreover, how do people like Rick Bragg not only survive it, but actually use this broken, unsteady foundation as a springboard to fantastic success on a global level? (Bragg won the Pulitzer Prize in 1996 for journalism, while reporting for the New York Times.)

This is a must read, for everyone who thinks they “get” the south. Bragg will give it to you straight up, with a bloody lip if you’re not careful.

I wrote a follow-up, after my second reading, which you can see here. 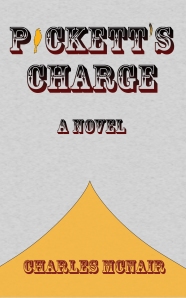 Threadgill Picket is the last living Confederate soldier, and he just can’t let go of all the rage and grief the Civil War brought into his life. Haunted by ghosts, pursued by his demons – both real and conjured – Threadgill is a man on a mission determined to destroy his nemesis; the last surviving Union soldier, now living in a Bangor Maine.

Pickett’s Charge is an epic road show that carries you along on Threadgills harrowing (occasionally hilarious, as often quite tragic) journey from Alabama, due north.  It’s a trip through time and imagination that keeps reminding you why America cannot let go of the Civil War, why prejudice still prevails despite 150 years of “peace”, and what price we pay in the end for hanging onto rage and the relentless desire for vengeance.

It’s clear that Charles McNair wanted to write a lighthearted novel about one stubborn man’s personal vendetta. Threadgill Pickett clearly had something very different in mind. Through him, we experience a post-war South as pitifully scarred as the old soldiers’ ravaged body, but paradoxically, as essentially pure as his love for his native soil, his mischievous  twin brother Ben, his saintly old Aunt Annie who raised him, and the beautifully tragic Eva, who was Threadgills’ first and only love.

McNair’s prose begins thin and lapping, then gradually builds like a hurricane crescendo that carries the reader on a whitewater crest toward a conclusion that is as unexpected as it is dreadful. From the top of that mountainous wave of skillfully drawn landscapes, familiarly detailed characters, and painfully wrought human interactions, we get a glimpse, through Threadgill’s last steps on earth, of what might have been, had Threadgill – had all the Billy Yanks and Johnny Rebs of the world, both then and now – chosen to throw a bar-b-que instead of a launch a Civil War. We’d all be living in a far better world.

Pickett’s Charge is a last ditch plea for reconciliation in the face of division, misunderstanding and blind ignorance. It’s a last, lonely Rebel Yell that warns us from the torment of Oblivion to choose a path different than the doomed circle we’ve been going around and around in for the last one hundred and fifty years.

Charles McNair’s Pickett’s Charge is highly recommended reading for anyone who thinks the Civil War is alive and still raging in our hearts, and especially for those who think it’s nothing but ancient history.

Musings on public history,, the history of Fredericksburg, the Civil War, and the Army of the Potomac--whatever I'm working on